Travelling Is Good For you | Part 2 |

An adventure of a lifetime

In 2011 Ireland was in the middle of a huge recession. Building work was nonexistent. So with a very good friend of mine I left Ireland and headed for New Zealand. New Zealand was hosting the rugby world cup that year and we were both big fans of rugby so we couldn’t wait.

We landed in Auckland in August and bought ourselves a green and white camper van with the intention to follow the Irish team around NZ. We had no idea the adventure we would have and where it would take us. 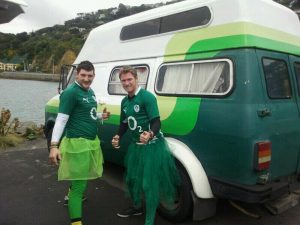 New Zealand is amazing. It’s such a beautiful country with idyllic landscapes and the most wonderful friendly people.
After a few months travelling and following the Irish rugby team we settled in Wellington.

I had brought a ukulele with me for the trip and had thoughts of making a living from busking. A few failed busking days later I reluctantly started searching for a ‘real’ job.
I got a few construction jobs that I didn’t enjoy and finally found carpentry work building a new section to Wellington University in an old cinema. It was in the middle of the city close to where I was living (in our camper van) .

The job was a good experience and the guys I worked with were great. But one thing during that job has remained with me.

The Power of Poetry

In one of the toilet cubicles somebody had wrote a poem on the back of the door.  There was something about the poem that really resonated with me, so every day after lunch I would go to this cubicle, whether I needed to use the bathroom or not just to read this poem.

The Man in the Glass

I felt something in me was changing or had changed during my time in NZ. It was only looking back at my time there that I could understand it.

After 12 amazing months I left New Zealand and headed for Perth Western Australia. In the airport just before I left I purchased a book called “The 4 Hour Work Week”. Safe to say the title appealed to me.
What I didn’t know then was how that book would change my life.

For most of my life up until that point I felt money and making money was our main objective. The more money you make the happier you’ll be. That’s the western Ideal. Work hard, make lots of money, by stuff, be happy. Sounds easy.

That book made me question everything. From how we make our money to how we spend our time to what’s more valuable time or money? It talks about enjoying life while you live it, as opposed to waiting until the retirement to do all the things you want to do . Even taking mini retirements along the way. A concept discussed in the book.

In Perth I got a really well paid job thanks to my friend building houses for people working in the mines in Northern Australia. These were the jobs everybody in construction wanted because the money was fantastic. As I was to find out, money isn’t everything.

So I moved to a town called Karratha and moved in with my friend and 6 other guys I would be working with.

The work was okay but the conditions were tough. We were working outside in 35 degree (Celsius) heat 12 hours a day 6 days a week. That was the main reason the money was great because you’re always working.

After a while I began to hate being there. I didn’t get on with the guys I was working with. I would read a lot and so I became the butt of all there jokes. It was normally 6/7 v 1 so I would withdraw more and more into myself. Things became very difficult for me.

I didn’t know what to do but I knew I couldn’t stay there long term.

As a youngster my dad would come home from work and check the share prices (financial markets) on tele-text. Over time I became curious as to what he was looking at and began to take an interest in it.
While I was working I saved some of my money and invested it in some shares I picked myself. Those shares did very well and part of that money I used to go travelling.

I had an interest in stocks and shares and I would buy books educating myself on the subject.

During my time in Australia I began thinking about studying financial trading and changing the career I was doing. While I was having difficult time with my job and my colleagues these thoughts became stronger and more frequent.

I figured if I worked and saved all my money for 5 months I could move to a cheap country to live and study. There I would download online courses and books about financial trading and teach myself. Study for 10 hours a day for 6 months and at the end of that period I would know enough about investing where I could start making a living from it.
I didn’t think it was a bad plan. What could go wrong?

The first part I had to decide on was where this country was. I was looking for somewhere cheap to live as it would keep my expenses down while I studied. I also wanted somewhere warm with good English and fairly good internet.
After a few weeks of research I decided my destination was The Philippines. I didn’t know much about the country but what I learnt I liked. After a bit more research I choose Cebu as the city I would head to.

So that was it. I knew where I was going and what I was going to do. For the next 5 months I just kept me head down and worked. Work improved and relationships with my colleagues improved but my mind was made it. When the time came to give my 2 weeks’ notice everybody was shocked. Nobody expected it.

My parents had arranged a trip to Australia to visit as my brother was living in Sydney and my sister was also in Australia at that time.
I had a few nice weeks with friends and family in Sydney and Melbourne. Then my adventure in Australia was over.

Next stop The Philippines

Travelling Is Good For you | Part 2 |

An adventure of a lifetime In 2011 Ireland was in the middle of a huge recession. Building work was nonexistent. So with a very good friend of mine I left Ireland and headed for [...]

Distinctive new Irish instrument for Dancers to Practice and perform The creation of The World’s First Amplified Dance Floor a unique Irish hand crafted Dance instrument is giving music and dance lovers of any [...]

Why I decided to Start a Company building musical Instruments: Part 1

Making My First Musical Instrument: Around this time last year I spent time writing a diary/journal about my journey with the Mitchell Drum and how I got involved in Making My first musical instrument. There [...]